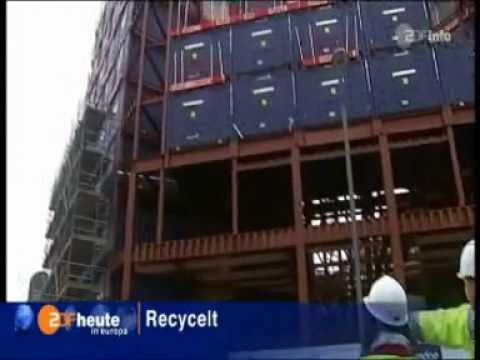 Travelodge, the budget hotel company, completed their first recycled hotel made out of shipping containers in August 2008. The 86 containers used in the Uxbridge hotel were prepared in China with plasterboard walls, electrics and bathrooms already in place before being shipped to the UK, stacked and assembled like lego pieces. The containers are simply bolted together and once installed at the site, windows are fitted, the modules are decorated and furnished, and then the exterior of the building is cladded.

The steel containers used were two different sizes and allowed for 120 rooms and a Bar/Cafe to be installed. The containers are fully re-useable and can simply be disassembled and shipped off to the next location if necessary.

Verbus Systems — a joint business venture between consulting engineers, Buro Happold and constructor, George & Harding has developed its unique modular construction system over the last four years. The design innovation is being considered a revolution for temporary accommodation at festivals and major sporting events due to the ease and speed in which the buildings can be taken apart and reassembled.

A traditional 100-bed hotel costs Travelodge around £5 million to build. Construction using shipping containers reduces costs by up to 10 per cent, making the bill for a hotel of the same size around £4.5 million. Using Verbus Modules also shaves approximately 25% off construction time, meaning a 100-bed hotel can be built in 30 weeks, instead of 40.

Green Homes for the Future